In ye name of God, Amen. We whofe are underwriten, the Loyall subjects of our dread soveraigne Lord King James by ye grace of God, of Great Britaine, Franc, & Ireland King, defender of ye faith, &c. Haveing undertaken, for ye glorie of God, and advancemente of ye Christian faith and honour of our king & countrie, a voyage to plant ye first colonie in the Northerne parts of Virginia, doe by these presents solemnly & mutualy in the presence of God, and one of another, covenant & combine our felves togeather into a civill body politick, for our better ordering & prefervation & furtherance of ye ends aforesaid; and by vertue hearof to enacte, constitute, and frame fuch just & equall Lawes, ordinances, Acts, constitutions, & offices, from time to time, as fhall be thought most meete & convenient for ye generall good of ye Colonie, unto which we promife all due submission and obedience. In witnes wherof we have hereunder subfcribed our names at Cap-Codd ye .11. of November, in ye year of the raigne of our soveraigne Lord King James, of England, France, & Ireland ye eighteenth, and of Scotland ye fiftie fourth. Ano: dom. 1620 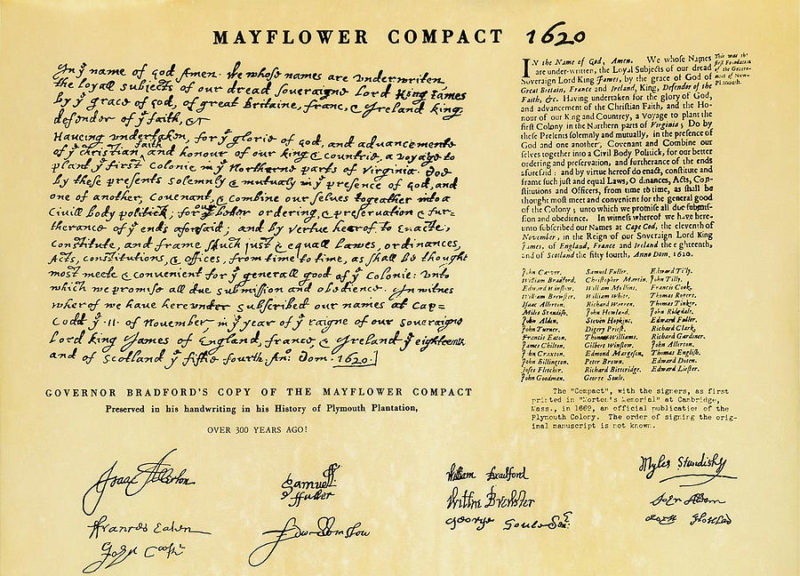 Because their landing was outside their patent area, there was dissent among the passengers as to whether or not they still needed to follow their signed agreements concerning their working within the colony. To combat this, the Pilgrims drew up a civil document which established the system by which they wished to govern themselves. This document has come to be known as the Mayflower Compact. It was signed in the cabin of the Mayflower by all 41 of the adult male passengers on the 21st of November, 1620. (November 11 Old Style).

The original hangs at the Pilgrim Hall Museum in Plymouth, MA. (from wikipedia.org)